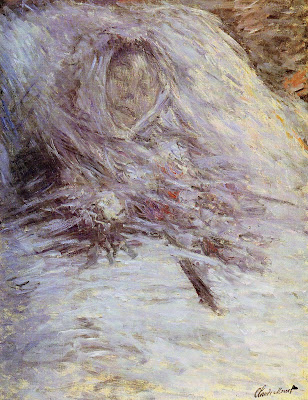 Claude Monet, Camille on Her Death Bed, 1879
Claude Monet married Camille Doncieux in 1870.  She became ill with tuberculosis after years of sharing her husband's poverty in 1875.  She died in 1879.  Monet many years later wrote the following account of the genesis of this painting to George Clemenceau.

... One day, when I was at the death bed of a woman who had been and still was very dear to me, I caught myself, my eyes fixed on her tragic forehead, in the act of mechanically analysing the succession of appropriate color gradations which death was imposing on her immobile face.  Tones of blue, of yellow, of grey, what have you?  This is the point I had reached.  Certainly it was natural to wish to record the last image of a woman who was departing forever.  But even before I had the idea of setting down the features to which I was so deeply attached, my organism automatically reacted to the color stimuli, and my reflexes caught me up in spite of myself, in an unconscious operation which was the daily course of my life - just like an animal turning his mill.

No anonymous comments will be accepted.
If you wish to say something dissenting or unpleasant, then do so. But, you must identify yourself either with your own name or a fake name. "Anonymous" comments will be deleted without exception.

I stand by my comments. I expect you to do likewise.